At a level of 378 meters, the Sangerhof Tower is the highest elevation in the municipality of Henschtal. The tower is located on the premises of Sangerhof stud farm. The former water tower has a height of 15 meters. Today it serves as a mobile phone base station and viewing tower. A narrow, steep stairway leads to the top of the tower. Through small windows, you can enjoy magnificent views of the surrounding area. 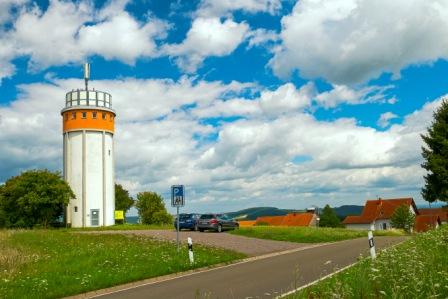 The 7.50 m high replica of a medieval watchtower was built in 2005 as a landmark along the “Diamantschleifer-Weg” hiking trail. It is located in the communal district of the municipality of Ohmbach, below a 375 meters high summit called “Wartenstein”. According to tradition, an old stone vantage point is suspected to have existed on this distinctive hill between Ohmbach and Kohlbachtal. In the Middle Ages watchtowers served as look-outs for sentinels and guard towers. The summit “Wartenstein” offered great visibility. Approaching dangers could be foreseen and reported in time. From that hill, there was visual contact to an imperial castle that was located in Kübelberg in the Middle Ages. Nowadays, people still take advantage of the topographic benefits of the summit. In addition to a high-level water tank, a mobile phone base station was installed a few years ago. 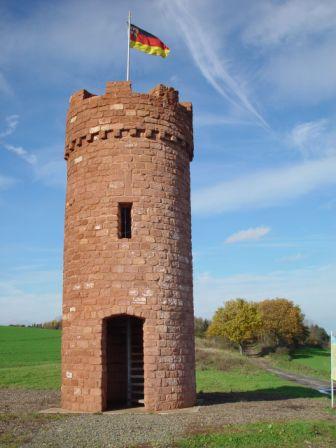 Address: Steinbacher Strasse, 66904 Börsborn
Parking is available at the Bürgerhaus (Hauptstrasse 27) and at the cemetery.

This historical monument was built in 1788. The construction of the tower was an initiative by Countess Marianne von der Leyen (*1745 – †1804). At the same time, another tower of this kind was built in the close-by village of Steinbach am Glan, which houses the Jewish Museum today.
The noble family ‘von der Leyen’, whose former royal residence was Blieskastel, ruled since the 15th century over the “Amt” Münchweiler (today Glan-Münchweiler), to which six other municipalities belonged besides Börsborn. Display boards in the tower provide information about the counts von der Leyen, the Countess Marianne von der Leyen, the “Amt” Glan-Münchweiler, and the municipality of Börsborn.
The tower is the landmark of Börsborn and was built of sandstone. The bell, which hangs at the top of the tower, dates from 1922 and was cast by the foundry Pfeifer in Kaiserslautern. It is assumed that a bell was already in place when the tower was completed. This was melted down in World War II and replaced by a post-war gift from the Protestant church community of Glan-Münchweiler.
The bell used to indicate the time to the rural population working in the fields twice a day: the noon bell at 11 a.m. and the evening bell at 6 p.m. Another important function was the alarm sounding to indicate fire hazards up to the introduction of sirens. The bell is still ringing today when a person from the village passes away – the so-called “sign ringing.” It is also used as a death ring at funerals.

The tower is located along the Hiking Trail Jewish Culture – stop by for a visit during your hiking tour!

The district names “Am Galgenhügel” (engl. gallows hill) and “In der Galgendell” (engl. gallows dell) indicate that this area was the location of the gallows of the former Electoral Palatinate Court in Kübelberg. A historic main road from Metz to Mainz was leading along here. From the 12th until the 16th century the court exercised jurisdiction for death sentences on behalf of the territorial sovereign. In the Middle Ages, it was common to carry out death sentences in public in order to scare off and indoctrinate the spectators and transients. The court was dissolved in 1797. A replica of the gallows was set up here as a landmark along the “Ritter Gerin” hiking trail. 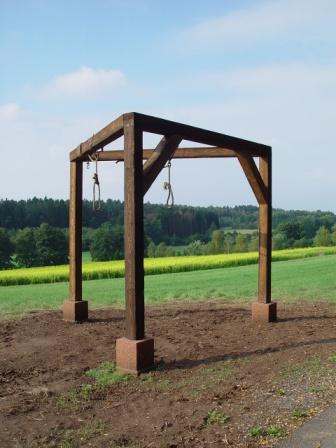 The open-air museum “Villa Rustica” in Herschweiler-Pettersheim shows a former estate from the 2nd to 3rd century. The facility is accessible at any time. The “Villa Rustica” was discovered in 1952 and the first excavations began in 1959. After the excavations, the Roman courtyard was the first object of its kind in the Palatinate to be preserved as an open-air museum. Signposts provide an accurate overview of the room layout of the “Villa Rustica” by assigning the restored foundation walls to the respective rooms of the estate. The excavated complex corresponds to a typical form of rural farms in the northern Roman provinces.

The circular hiking trail “Villa Rustica” (length approx. 6 km), starting from Herschweiler-Pettersheim, leads you directly to this testimony of the past.

Opening hours:
Free admission and access all day round 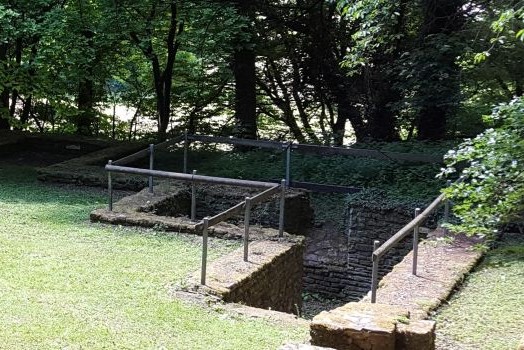 On the premises of the Protestant church in Glan-Münchweiler, the Roman Four Gods‘ Stones and two stone sarcophagi are freely accessible.

Two of the stones, once parts of Jupiter’s columns, were discovered in 1771 when the Gothic nave of the Protestant church was demolished. On the four-sided ornamented blocks of the stones the gods Juno, Mercury with Caduceus, Minerva, and Hercules can be recognized. The other two stones and the sarcophagi were discovered during restoration work in the interior of the church between 1957 and 1958. The stones were built into the church’s masonry. The reliefs are moderately preserved, but all images of the gods can be named. The four gods‘ stones were once parts of Jupiter’s columns, which were widespread in the Roman provinces of Upper Germany, Lower Germany, and Gallia Belgica. The oldest and most elaborate Jupiter’s column is located in Mainz and must have been 12 meters high. The two sarcophagi vividly illustrate the inhumation burial as a common burial custom of the late Roman Empire. 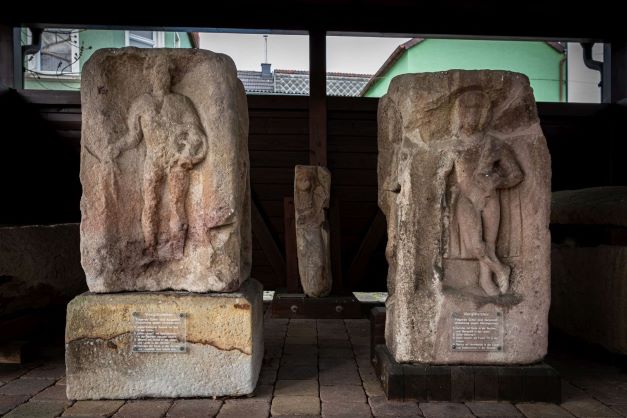 Below the Dietschweiler Mill at the Glan creek is the location of the washing area of the former municipality of Dietschweiler. This facility was built in 1889 and was still used intensively between 1950 and 1960. The location of the washing area probably had to be changed slightly with the construction of the railway, which was completed in 1904, as the course of the Glan creek was changed throughout the construction process.

Opening hours:
Free admission and access all day round 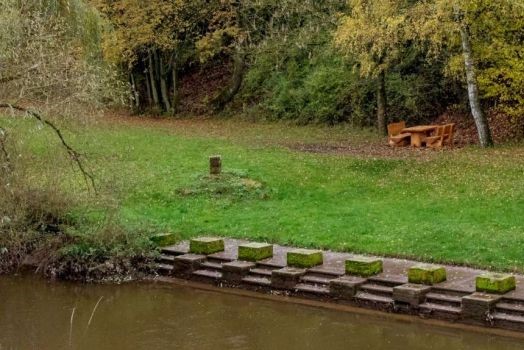 Around 1843 the first beer cellar was dug into the sandstone by Silesian miners in Schönenberg and taken over by Daniel Niergarth, the first beer brewer, in 1844. At the beginning of 1900, the era of the breweries came to an end, and the tunnels were used as air-raid shelters in the Second World War. In 2008, the municipality of Schönenberg-Kübelberg began to expand the tunnels for touristic use – the official opening was in December 2010. The street name “Am Bierkeller” still reminds us of this unusual facility.

Due to current renovations, the historical beer cellar complex remains closed to visitors at the moment. 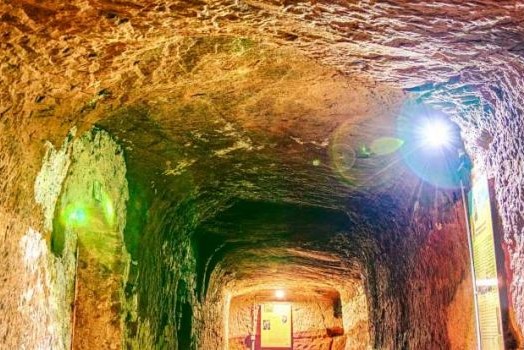