With 687 meters in height, the Donnersberg Mountain is the highest elevation in the Palatinate. With its rocks, viewpoints, and broad valleys, the massif does not only offer impressive experiences of nature. Its history of origins, an abundance of geological finds and mining relics, and especially the Celtic history, has already amazed many visitors. 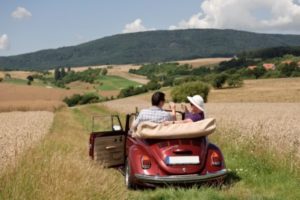 Even today, the castle ruins rise above the community located southwest of the foothills of the Donnersberg Mountain. The castle was the ancestral seat of the Falkenstein counts. It was first mentioned in a document in 1135. Besides the wonderful view, the castle ruins with its adjacent openair stage offers a suitable venue for castle tours in the moonlight, literary hikes, geo-tours, concerts, and medieval markets. 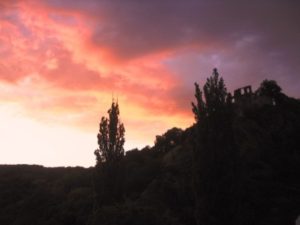 Even if the commencements of the Moschellandsburg Castle remain untold, documentary evidence from 1130 proves that a castle complex was already constructed on the Landsberg Mountain  in the early years of the last millennium. A visit to the castle ruins clearly shows that the cone-shaped mountain was eminently suitable for the construction of the castle: The mountain kingly dominates the landscape between the Donnersberg Mountain and the foothills of the Hunsück Mountains. Today the castle ruins offer an enchanting backdrop for cultural events. 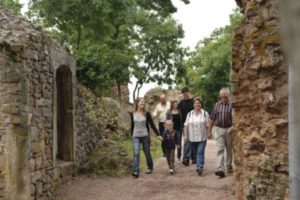 The Cistercian convent St. Maria in Rosenthal located south of Göllheim was founded in 1241. The church was built according to the early Gothic style. Today, the single-nave abbey church consists of wall-remains with buttresses and the western gable that sustains the turret with its extraordinary roof, which is the landmark of Rostenthal. The church ruins are the venue for cultural events such as concerts, the annual Christmas bell-ringing, and weddings. 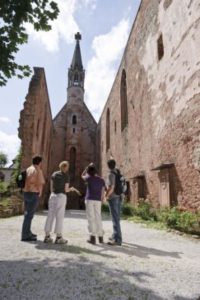 According to finds of broken fragments, a Roman settlement already existed at the ancient west-east connection to Worms in the 1st century A.D. in the area where nowadays the town of Eisenberg is located. Thanks to favorable preconditions – deposits of iron ore/ wood/ clay – Eisenberg was among the most important towns of the Palatinate in Roman times. There, 20 houses have been excavated and documented. On top of that,  workshops, stores, a market square, a basilica, and an administration building including a police station were found. Every two years the park is brought to life throughout a Roman festival with gladiatorial games, and a Roman camp. At the Roman Museum in the town center of Eisenberg, interesting finds, models, and pictures illustrate what Roman life was like in Eisenberg in former times (Address: Friedrich-Ebert-Strasse 28, 67304 Eisenberg).

Opening hours:
Guided tours of the Roman Park on request!
The Roman Museum is open every 1st Saturday of the month from 3 to 5 p.m. or on request! 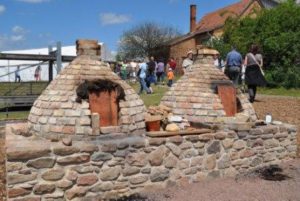 The city of Kirchheimbolanden is also called “Kleine Residenz” (small residence). The undestroyed historic cityscape shows a medieval charm. In 1368 Kirchheimbolanden received its town charter. In 774 A.D. the ancient parish of Kirchheim was first mentioned in a document, but the origins of colonization already date back to the Iron Age. Until today the five medieval towers and the city wall (partly accessible) characterize the impression of the city. The reign of the Princes Karl August (1719 – 1753) and Karl Christian (1753 – 1788) was a time of prosperity for Kirchheim. The palace – including gardens, the “Hofkirche” (today “Paulskirche”), the “Ballhaus” (a building for ball games), the “Komödienhaus” (theater), and the grand buildings in Alleestraße and Amtsstraße – were constructed during this period. At Princess Caroline’s invitation, Mozart resided in the city in 1778 and played the organ at “Hofkirche”. The same Stumm-organ can still be admired at “Paulskirche” today and bears the name “Mozart-Organ” in remembrance of the famous composer who played it. 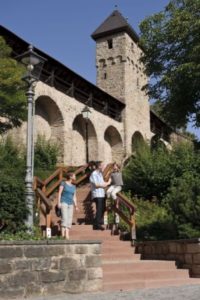 Rockenhausen is a scenic town in the North-Palatinate providing great options for the ones seeking cultural events, adventures, and relaxation. The town center was lovingly restored, preserving the old structure. With four museums, Rockenhausen is a cultural center – surrounded by unspoilt landscape offering a vast number of possibilities for hiking and bike tours.  The visitor can find a varied offer of museums reaching from a museum of local history to modern art. The museum “Kahnweilerhaus” venerates the man who discovered Picasso, Daniel-Hendry Kahnweiler. The “Museum für Zeit” (Museum of Time) with its collection of tower clocks and the biggest astronomical clock in Europe focuses on all aspects of time and the “Museum Pachen” presents arts of the 20th century. All museums host special exhibitions on a regular basis. In July and August the “Schlosspark” is the venue for a music festival called “Musikalischer Sommer Rockenhausen”. Throughout summer, a visit to “Naturerlebnisbad” is recommended. This outdoor pool with untreated water arouses the same feeling as taking a bath in a lake. Year-round you can have a great time in Rockenhausen visiting one of the traditional festivals – the highlight is the “Herbstfest” (autumn festival), which takes place the first weekend in September each year. 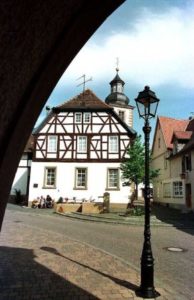